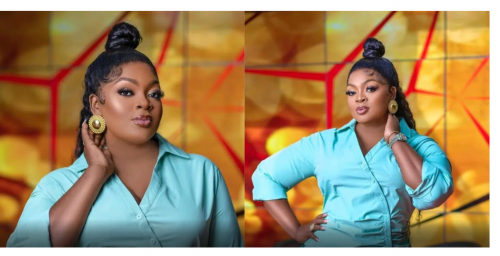 Ace Nollywood actress, Eniola Badmus has told naysayers to watch out, as they could end up choking on her new look.

The former plus-size actress shared another set of amazing transformation photos yesterday, where she wished her Muslim friends and fans a happy Sallah.

Rocking a turquoise blue mini dress, with asymmetrical button detail, the actress served us major “Baddosky” vibes, as she fondly loved to hail herself.

Seeing her new photo, a fan of hers in the comments remarked that the actress keeps getting slimmer by the day.

E just be like say she dey slim more every day.  I still find it hard to believe it’s really her sometimes

In response, Eniola Badmus told her to get used to the new her.

Get used to the new Baddo.