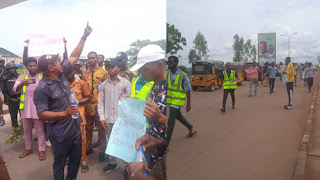 Several students and leaders of the National Association of Nigerian Students (NANS) from universities in the South-East region on Friday protested against the lingering strike action embarked upon by the Academic Staff Union of Universities.
The umbrella body of the lecturers in the public universities across Nigeria had on February 14, 2022, begun a four-week national strike to among other things force the federal government of Nigeria to attend to the protracted issues.


The umbrella body of the lecturers in the public universities across Nigeria had on February 14, 2022, begun a four-week national strike to among other things force the federal government of Nigeria to attend to the protracted issues.

The strike which was declared after a meeting of the National Executive Council of ASUU held at University of Lagos, also demanded "full renegotiation and implementation of 2009 and 2020 Memorandum Of Association (MOA)/ Agreements; adopt UTAS as opposed to the infamous and wickedly deployed IPPIS; stop the proliferation of universities, especially state universities without due regards to their funding requirements amid others.
After the warning strike, the leadership of ASUU declared an indefinite strike, after series of negotiations with federal government to resolve the impasse failed.
But the students who took to the street on Friday to protest the over three months’ old strike, gave the Federal Government one week to resolve all the issues; otherwise they would be forced to shut down economic and social activities across the country.
The students drawn from all the universities in the South-East were led by the South East Zonal Coordinator of NANS, Comrade Ibeabuchi Onyia.
The students, who converged at New Heaven by Naira Triangle Roundabout in Enugu State at about 12:30pm matched peacefully through Enugu-Abakaliki to the Akanu Ibiam International Airport roundabout.
They also carried placards with various inscriptions like "we are tired of staying at home, we want to go back to school". "Governor should use N80 billion the Accountant-General stole to settle ASUU". "#FG/ASUU we want to graduate". "FG your students are suffering, four years course now six years course. End ASUU strike now," among others.
Addressing journalists at the Airport roundabout in Emene, Onyia, warned the Federal Government to end the strike within one week, adding that Nigerian students were no longer going to keep quiet.
"They have stolen the country dry to contest for various political positions in 2023 but if they don't resolve the strike issues, we are going to make them have it hot. We are not relenting on this; we are ready to die for this. It is either the strike is suspended or the Federal Government tells us what they have for us.
"We came to the airport because that is where the elites and decision makers can see us and hear us. If the federal government and ASUU do not resolve and call off the strike before Friday next week, we will move all the students from across the South-East to occupy the airports for one week," he said.

Also speaking, the chairman, Joint Campus Committee, NANS, Enugu State chapter, Comrade Emmanuel Obi, said "We are on the road because we are tired of the tussle between ASUU and Federal Government. After we have spent two months at home, ASUU extended the strike action by three months.

"What it means is that we students will be at home for five months doing nothing. You know that an idle mind is the devil's workshop. We are tired of this nonsense between ASUU and Federal Government which has threatened our future. They should allow us to go back to our schools.”