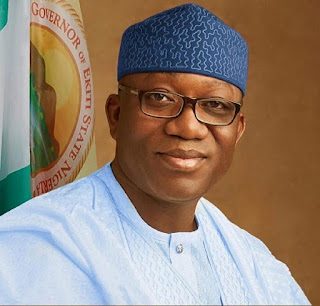 John Olukayode Fayemi, born 9 February 1965 is a Nigerian politician who is currently serving as the Governor of Ekiti State, in office since 16 October 2018. He previously served in office between 2010 and 2014 before losing re-election to Ayodele Fayose.

He was also the Minister of Solid Minerals Development in President Muhammadu Buhari's cabinet from 11 November 2015 to 30 May 2018, when he resigned to contest for a second time as Governor of Ekiti State.

John Olukayode Fayemi was born on 9 February 1965 a Yoruba native of Isan-Ekiti in Oye Local Government of Ekiti State.

Fayemi attended Christ's School Ado Ekiti from 1975 to 1980. He later went on to receive degrees in History, Politics and International Relations from the University of Lagos and University of Ife (now Obafemi Awolowo University).

From 1989 to 1992, he underwent Doctorate program in War Studies from King's College London, specializing in civil-military relations.

From 1993 to 1995, he was the Strategy Development Adviser of Deptford City Challenge in London. From 1995 to 1997, he was the Secretary General of the Media Empowerment for Africa (The Radio Foundation) in London. He was also a journalist with The Guardian and City Tempo; and the Editor of Nigeria-Now, a defunct political monthly magazine.

In 1997, Fayemi returned to Nigeria where he established the Centre for Democracy & Development, a research and training institution dedicated to the study and promotion of democratic development, peace-building and human security in Africa, where he served as Director from 1997 to 2006.

Kayode Fayemi has lectured in Africa, Europe, the Americas and Asia. He has also served as an adviser on transitional justice, regional integration, constitutionalism, security sector reform and civil-military relations issues to various governments, inter-governmental institutions and development agencies.

He was the main technical adviser to Nigeria’s The Human Rights Violations Investigation Commission (Oputa Panel), which investigated past abuses and served on the Presidential Implementation Committees on Security Sector Reform, NEPAD and the Millennium Development Goals. He was technical expert to the Economic Community of West African States (ECOWAS) on small arms and light weapons and United Nations Economic Commission for Africa on governance issues.

At other times he has served as a consultant to the OECD on Security Sector Reform and chaired the Commonwealth Human Rights Initiative’s Committee of Experts on developing guiding principles and mechanisms of constitution making in Commonwealth Africa.

In 2007, Fayemi made his entry into politics by contesting for Governor of Ekiti State. After three and a half years fighting through the legal system, on 15 October 2010 the appeal court sitting in Kwara state declared Fayemi the duly elected Governor of Ekiti State, and marked the end of Olusegun Oni's administration as the then Governor of the state.

Daily Trust, a national daily, captured the electoral journey in its editorial, published on Friday, 22 October 2010 under the title, Closure to Ekiti 2007 Governorship Saga.